Made in the Philippines: 1959 Chevrolet Corvette Resto-Rod

Sometime in November 2015, I went to the farm of my friend, The Philippine STAR columnist and political satirist Cito Beltran, in Lipa, Batangas to help him sell some of the vintage project cars in his collection. After suffering some back problems, Cito decided to clean up the garage in his farm and finish some of his other project cars while he’s still able to.

While wandering amongst his eclectic collection of vintage cars and car parts, I saw a collection of rough fiberglass molds hanging on one of the cluttered wall and ceiling rafters of the garage. I asked Cito about the molds and he said that he had a fiberglass mold maker make a mold of a friend’s vintage Chevrolet Corvette. He just wasn’t sure if it was a 1958, 1959 or a 1960 model but he jokingly admitted that the mold was a bit rough because they had to hurry making it. Apparently, his friend wasn’t aware that a mold of his beloved American sports car was being made.

Cito was planning to make a restored/hot-rod or “resto-rod” version of the Corvette with a modified Japanese inline-4 or 6-cylinder engine and 5-speed manual transmission. “I just wanted to see the faces of some snooty vintage car collectors when they see me tooling around in a vintage Corvette with a Japanese drivetrain”, he jested. “They’ll have a heart attack!”  He initially thought about using a chassis and drivetrain from a late model Chevy Impala but after having a difficult time finding a chassis that would fit, he moved on to other car projects. Cito almost forgot that he had the Corvette fiberglass molds until I asked him about it.

Actually, I was very interested in the Corvette molds for another friend, an American named Steve Spivey. I was helping Steve promote his locally-made fiberglass-bodied hot rods through Power Wheels Magazine.

Steve Spivey and one of his fiberglass-bodied hot rod creations.

While shooting the breeze at Steve’s shop one lazy afternoon, I asked him if there’s another vehicle that he’d like to build other than a hot rod. Steve quickly replied, “I’d like to build a 1961-62 Corvette, especially because Corvettes came with fiberglass bodies originally fitted at the factory, unlike my hot rods, which are originally made of steel. I like the 1961-62 models with the rear end that looks like the C3 Corvette (1963-67) because they’re easier to build than the earlier 1958-60 models with the toothed front grill and the recessed rear tail lights. If you find one, I’d like to make a mold out of it.” 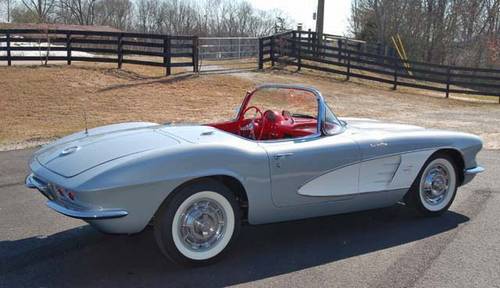 After telling Steve of the rough fiberglass Corvette molds I found stored unused in the garage at Cito’s farm, albeit from a 1958, 1959 or 1960 model, Steve asked me to accompany him to the farm so he could see if the molds were complete enough to resemble an actual Corvette. We went to Cito’s farm two months later in January 2016 and tried to assemble the fiberglass molds on the lawn.

Finding them complete, Steve, who’s based in Angeles, Pampanga, negotiated with Cito and came to an agreement on a price for the molds. Three weeks later, Steve had the molds picked up from Cito’s farm.

Cito Beltran (in shorts) and Steve Spivey haggle over the fiberglass molds.

Because of the demands of making a publication, I was not able to visit Steve for almost a year and check on the progress of the Corvette. When I finally found the time to visit him, Steve said that the molds he bought were very rough and brittle, and that he spent the better part of the year trying to perfect it.

… and massaged it until it was accurate, smooth and nice enough to make a new buck and mold.

He said that he made a “product” or a fiberglass body out of the molds that he bought from Cito and then measured, sculpted, sanded and formed the fiberglass body and used it as a “buck” where he can make new and better fiberglass molds.

… as well as the various panels, doors, hood and trunk.

After being satisfied with his new mold, he started working on the bespoke chassis which he likened to an Art Morrison aftermarket custom frame with independent front suspension fitted with adjustable coil springs and a rear solid axle with a limited slip differential.

… and rear solid axle with a limited slip differential.

Only after perfecting the body and chassis that Steve started working seriously on his first Corvette kit car. After finishing the body and chassis and mounting a small block Chevy V8 and 3-speed Turbo 350 automatic transmission, Steve’s hotelier friend asked him to paint the Corvette red and bought it. His friend then had the red Corvette lifted onto the top floor of a hotel he was building in Subic, Olongapo, before he had the roof of the building constructed. Steve’s Corvette #1 is now the center piece of the rooftop bar of that hotel.

This red beauty is Corvette #1, the first retro-rod completed by Steve from his improved molds.

This red Corvette is now the centerpiece of a rooftop bar in Subic.

Steve then geared up to work on Corvette #2. He decided that it would be a blue one with a modified small block Chevy 350-cubic-inch (5.7-liter) V8 and 4-speed THM 700R4 automatic transmission.

After the red Corvette was sold, Steve started working on Corvette #2…

… which he finished in metallic blue with a white cove.

While he was working on the blue Corvette, he was approached by a wealthy businessman to build another Corvette, this time with a modern Chevy LS1 V8 engine and a matching modern 4-speed 4L60E automatic transmission. The businessman wanted his Corvette to be painted in a metallic shade of deep red / maroon like the current Mazda MX-5.

Steve discusses the finer points of Corvette #3, which will be painted a deep shade of red or maroon…

… and powered by a souped-up modern LS1 Chevy V8.

So, Steve was working on two Corvette retro-rods at the same time – a blue one and maroon one. He acquired an LS1 motor and proceeded to install power-adding modifications. While working on the businessman’s car, which he dubbed as Corvette #3, he also worked on finishing the blue Corvette (#2). After another year of late nights, hard to find parts, local parts fabrications, and countless cigars, Steve was finally able to finish the blue car, Corvette #2.

Unfortunately, Steve finished the blue Corvette around the time that the government ordered everyone to remain under Extreme Enhanced Community Quarantine, which means a lock down of most towns so people will stay home to avoid being infected with the COVID-19 virus. Thus, he couldn’t drive it around, or worse yet, I couldn’t go over to Angeles and drive the finished car myself.

I’d like to see for myself how a resto-rod Corvette, especially one that was hand-built and homemade here in the good ol’ Philippines, drives around the city streets. Steve said that he’d even allow me to drive his blue Corvette to Manila to shake it down and break it in, provided that I give him some feedback about his handiwork in return.

I get excited just by looking at the photos that Steve sent of his finished blue Corvette. I want to hear the roar of the small block Chevy V8! Each time I look at the photos, I almost want to risk going through COVID-19 checkpoints and violating quarantine protocols. But of course, I won’t. I’ll just wait for the day when the quarantine is lifted and it’s safe to go out again.

I hope by the time I can go to Steve’s shop to test drive his blue Corvette, it would still be there. I’m keeping my fingers crossed because I know that Corvette #2 is a very desirable piece of voluptuous Americana. Steve even joked that he’d be tempted to let go of the blue Corvette if somebody offered him P2.5 Million for it. “After all”, Steve muttered, “I can always build another one.”

Yes, he could build another one if somebody bought this blue Corvette but that would mean I have to wait long to drive Steve’s creation. Ooh… when will this lock down end? Can somebody find a vaccine for the Corona virus soon, please? So that I can be infected with a much more potent malady – the dreaded and expensive-to-cure Corvette fever!