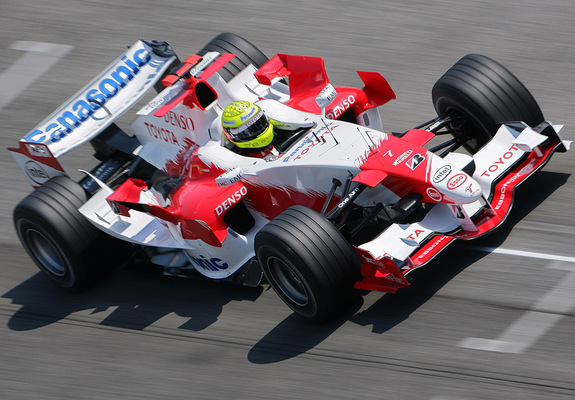 Toyota Motor Corporation made their debut in the highly competitive world of Formula One (F1) in 2002 with their TF101 race car.The Panasonic Toyota Racing team came from Toyota Motorsport GmbH (TMG), which had previously competed in the World Rally Championship and the 24 Hours of Le Mans. Despite earning a point in their first-ever F1 race, they never won a Grand Prix and their best finish was 2nd place, which they achieved five times in 2005, 2008 and 2009.

Toyota retained driver Jarno Trulli and wooed Ralf Schumacher from the Williams F1 team to drive the TF105 race car in 2005, which can be considered as Toyota’s most successful Formula One season. Toyota retained the same driver lineup for 2006 but switched from Michelin to Bridgestone tires. The team was one of the first to unveil their new race cars but the performance of the TF106 during testing was considered as only average.

Ralf Schumacher’s third place in Australia with the TF106 was Toyota’s only podium finish during 2006. Their highest race finishes were 4th at France and 6th at Hungary with Schumacher and 4th at the Brickyard with Trulli. The team had their second-best season performance in their history, scoring 35 points and finishing in sixth place, one point behind BMW Sauber.

Mike Gascoyne, who had contributed to Toyota’s competitiveness in F1 during 2005, was dropped from the technical department in 2006 primarily because of the TF106’s poor performances in the opening two races of the season, particularly in Bahrain where the team had finished on the podium a year before. Gascoyne disliked the team’s corporate operations while team management was unimpressed by the car that Gascoyne produced. Toyota drew criticism for their lack of success with the TF106.

Thus, we find it a bit intriguing for Minichamps to produce a 1:18 scale metal model of the TF106 driven by Ralf Schumacher. Perhaps, this model was commissioned prior to the 2006 F1 season in anticipation of Ralf’s unrealized wins. Regardless, this TF106 model, which was produced by Paul’s Model Art GmbH & Co. in Aachen, Germany and manufactured in China, is very accurate and highly detailed.

Sadly, on November 4, 2009, Toyota announced its immediate withdrawal from Formula One, ending their involvement after eight seasons and leaving behind only memories and mementos, like this Minichamps 1:18 scale Panasonic 2006 Toyota TF106 model race car. We‘re pretty sure it’s bound to become a collectible item sometime in the near future.