2020 Ford Ranger Raptor: A Short Drive Up The Mountains

Before the lockdown in Metro Manila was implemented, we had Ford’s Ranger Raptor with us and were scheduled to go on an off-road shoot outside the city. Unfortunately, a few days before the trip, the Philippine government had announced quarantine and our supposed adventure was obviously canceled.

The lockdown was yet to take effect in two days so we technically had one last shot to go out of the metro before the quarantine began. So we decided to go for a quick road trip nearby just to take the Raptor with us. And we found ourselves on a spot with a full view of the mountain ranges of Rizal province.

This is where our short, but intimate journey with the Ranger Raptor began. 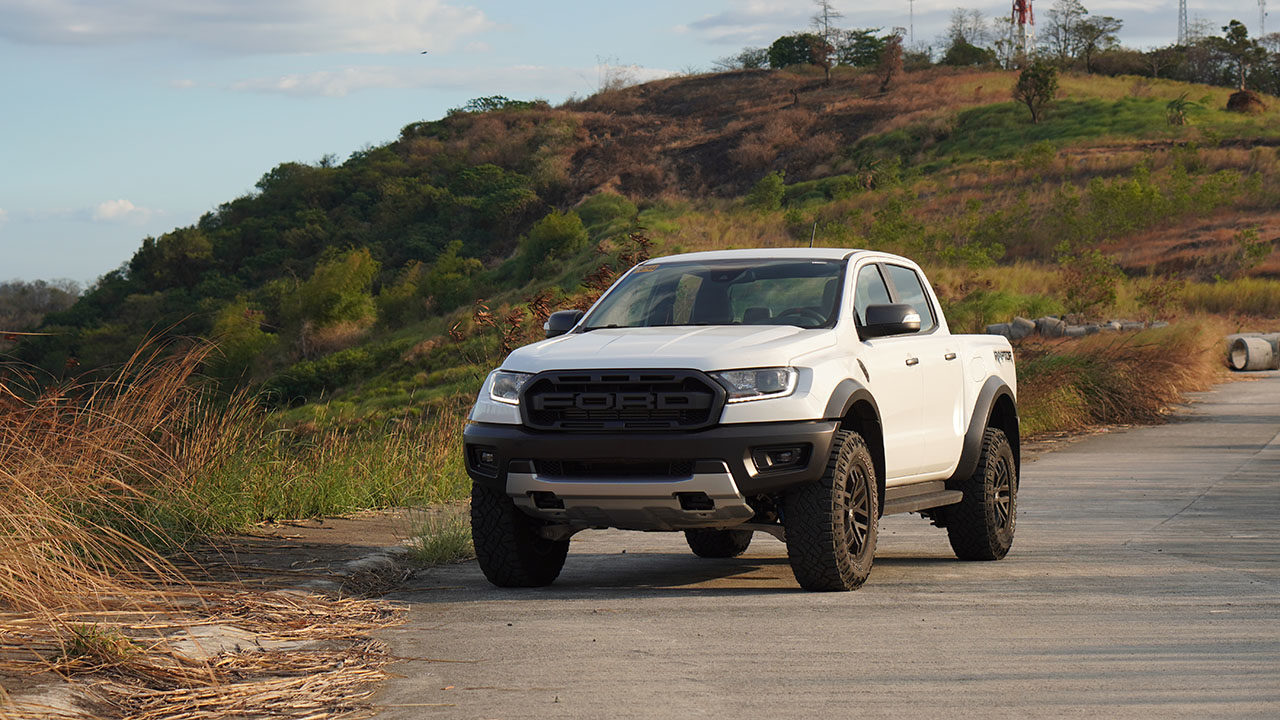 The Raptor, upon first glance, looks like someone who spends most of its time at the gym. Its overall exterior is bulky and is defined by its flared and blacked-out wheel arches while a commanding grille at the center simply begs your eyes to gravitate towards it.

It’s got HID for headlamps that are accompanied by a pair of daytime running lights and front LED fog lamps. Since Ford built it to be tough, its front fenders resist dings and scratches so you know it’s ready for anything. 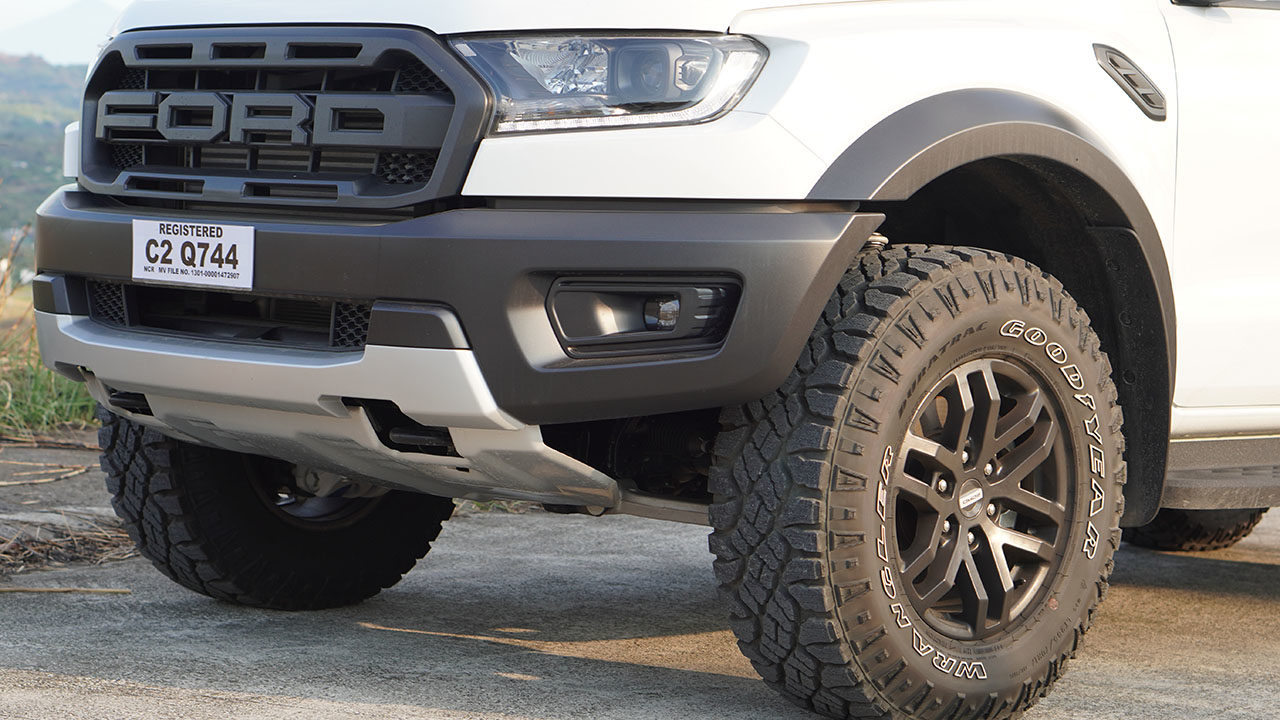 Oh and that chunk of metal right under the bumper? That’s Ford’s giant bash plate to protect the underside of the Raptor when it’s doing its thing — like climbing steep trails or going over dunes at full speed. From this angle, we also see its 17-inch alloy wheels with 33-inch all-terrain tires.

For those into numbers, it’s designed to have a 283mm ground clearance, 850mm wading depth, towing capacity of 2,500kg, and payload capacity of 766kg.

If you’ve been inside the Ranger Wildtrak, it’s pretty much the same tune for the Ranger Raptor except for some highlights here and there. There are vertical air vents still sandwiching its touch-enabled head unit with knobs and buttons for the lower half. 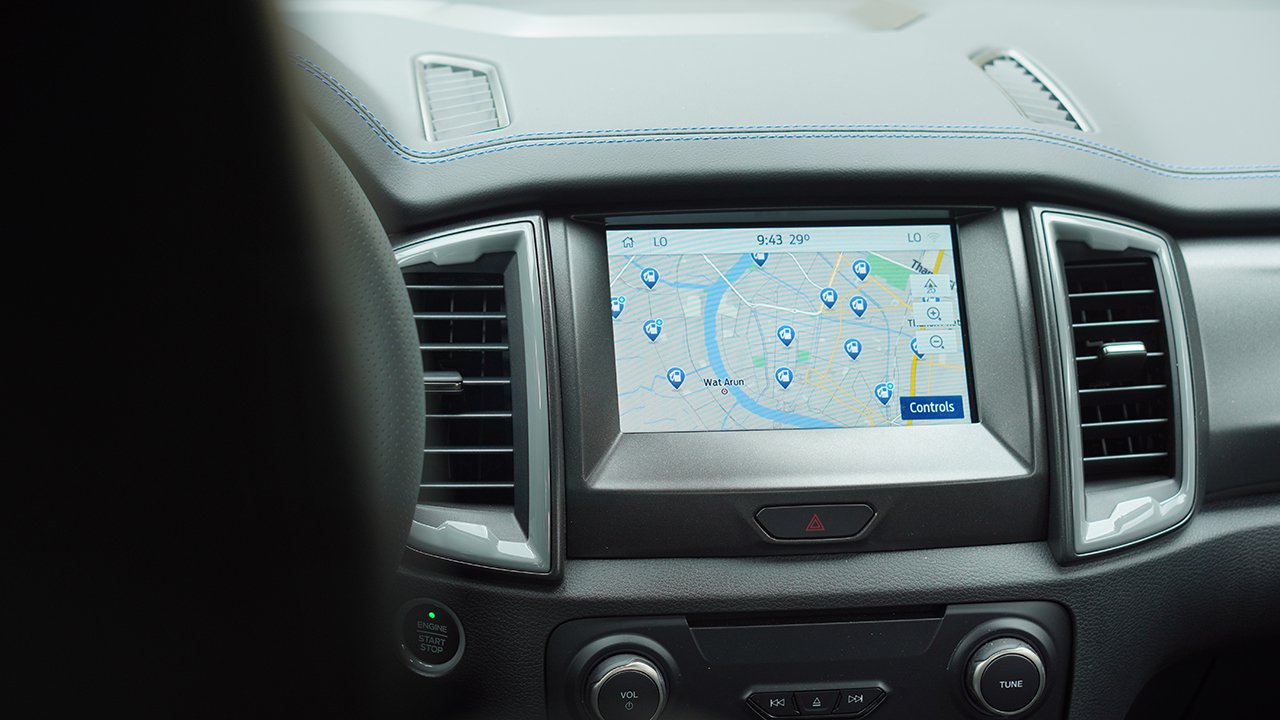 What’s changed, though, are some of the materials used. There are now more metal-inspired elements and non-glossy panels when you look around. There’s also a red strip on the top center part of the steering wheel to remind the driver of the correct orientation of the wheels when off-roading, for example. Its combination of analog and digital gauges also made it easy to glance at for needed information while driving and button placements all over the cockpit are ergonomically placed. 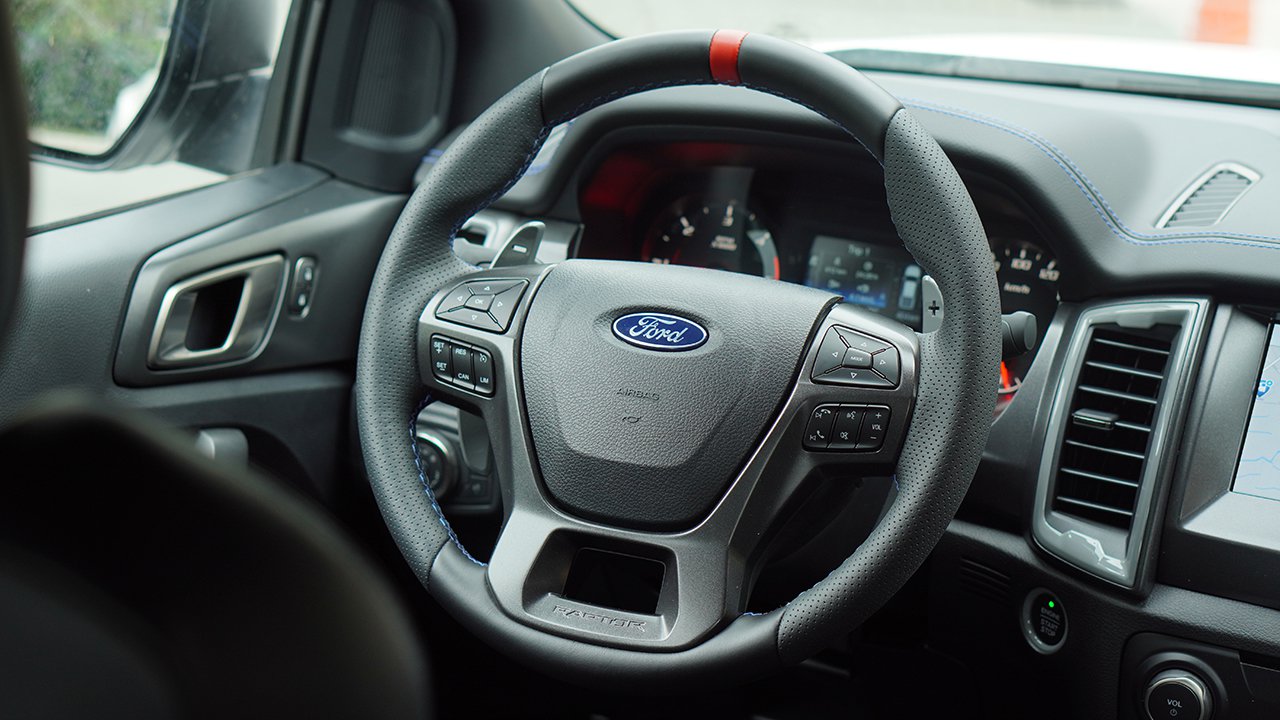 The interior is spacious and can comfortably seat up to four people. Since this is a pickup, you can have one more person sit in the middle of the backseat but that might not be too comfy especially for long drives.

With these amenities, our drive up to the mountains of Rizal was comfortable — our phone was paired using Android Auto, navigation and directions were displayed on its screen, and our music was playing on Spotify. While these are not key features of the vehicle, they do contribute in making your road trips more enjoyable.

The Ranger Raptor isn’t all brawns, however. It’s also packed with intelligent features to make driving easy and most importantly, safe for everyone onboard.

For getting out of a parking space or in tight spaces, the Raptor is equipped with front and rear park assist that use its proximity sensors in addition to its reverse camera. There’s cruise control for laid back driving on highways, adjustable speed limiter, and hill start assist for a bit of assistance on inclines. 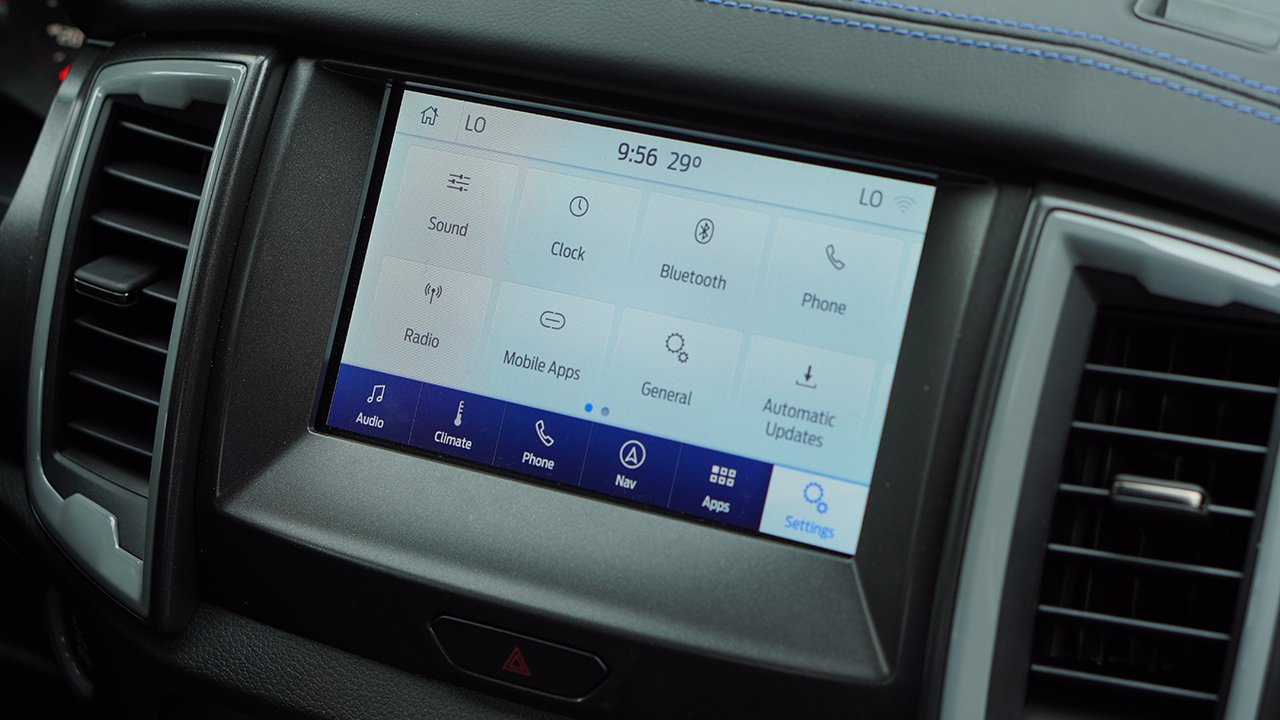 The mere presence of these features already suggests that while the Raptor can take on the heavy beatings of off-roading, it can very well deliver the same performance for gentle, relaxed drives. Additionally, it also has keyless entry, auto headlamps, and rain-sensing wipers.

If the need arises, the interior has been equipped with front driver and passenger airbags as well as side and curtain airbags. The truck has Electronic Stability Program working with its Anti-lock Braking system, too, so you don’t easily lose traction and control of the vehicle even when road conditions get tricky.

You’ve probably seen a few videos or images of the Ranger Raptor speeding through unpaved roads or probably jumping its way through ramps like it’s not a huge vehicle. This is because the Raptor is more of an agile performance truck than an off-roader that slugs its way out of obstacles.

This is also why it’s equipped with shock absorbers from Fox Racing — a company that specializes in motocross and other extreme sports. With these 2.5-inch shocks and its giant bash plate, the Raptor is capable — if needed — of soaring in the air and landing as if nothing happened. How’s that for a pickup truck? 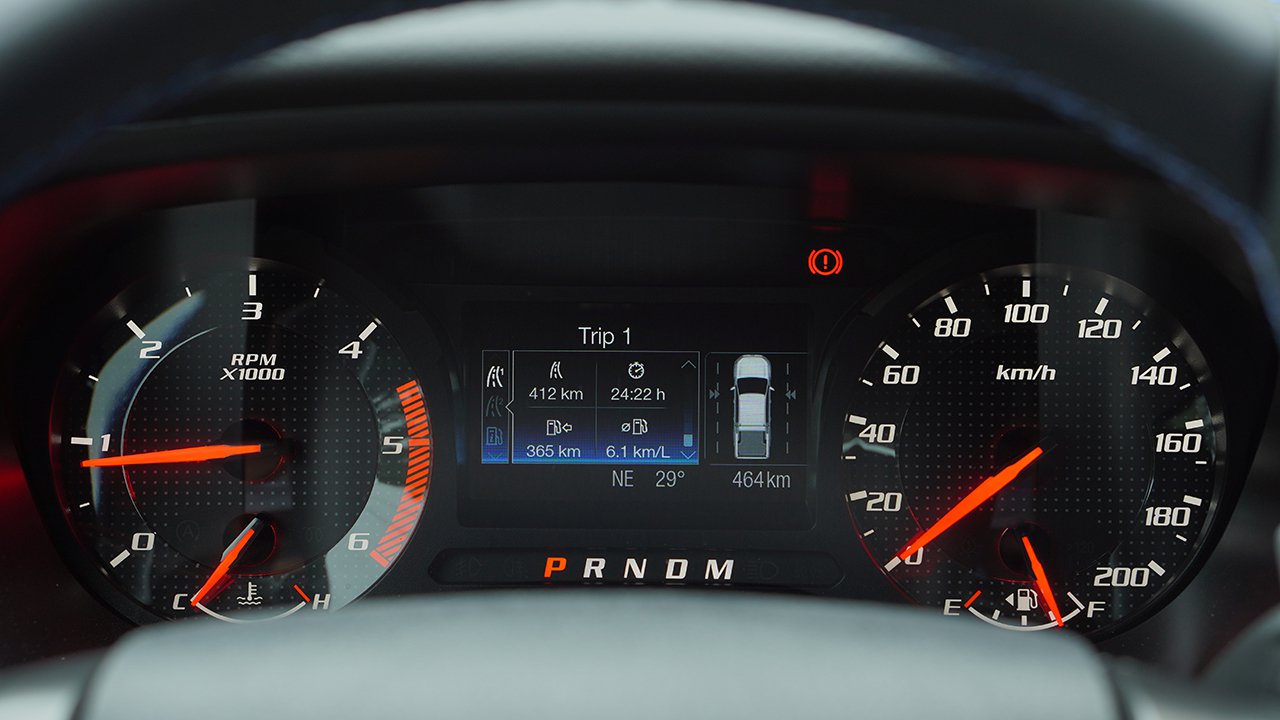 Of course, our trip to the mountains didn’t require us to do any of those. Instead, we took its 2-liter bi-turbo engine on a relaxed drive but still enjoyed the response it offered during those times we needed to speed up.

Its 10-speed automatic transmission also made sure that it can correctly accommodate the input we give its accelerator. It was handy for long, straight roads of the highway but also useful for the varying driving habits in the city. 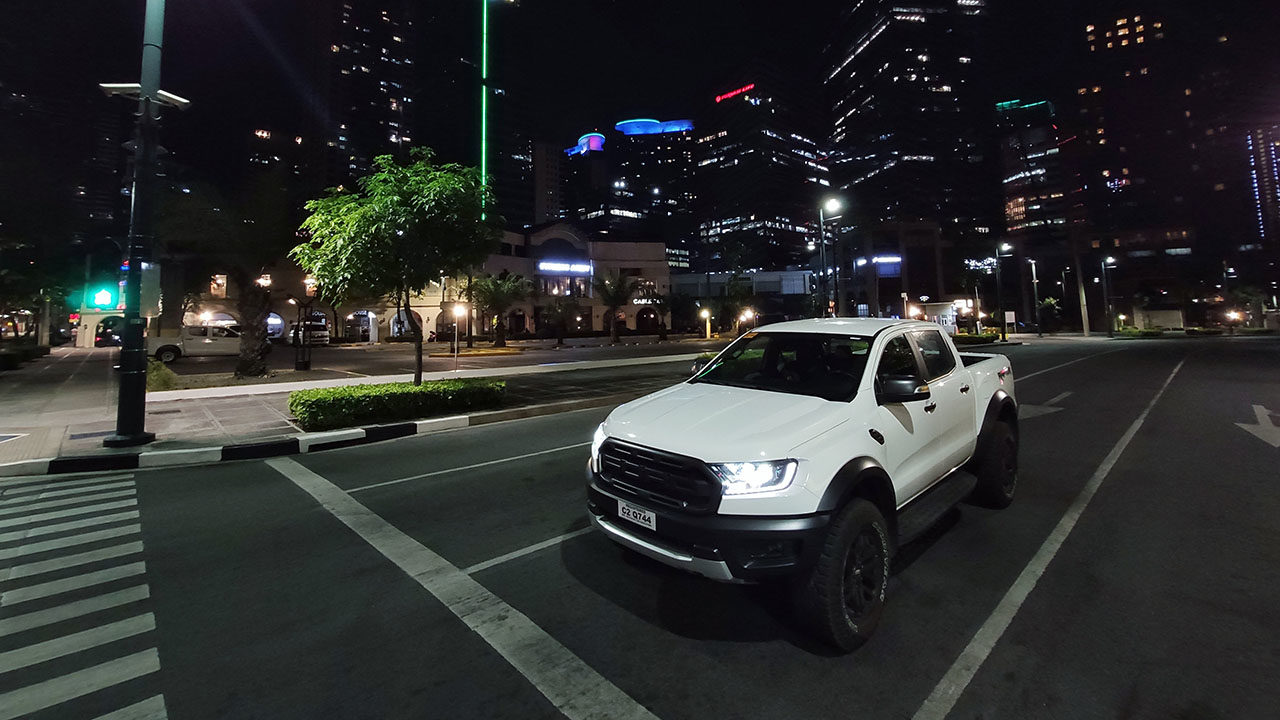 What we specifically admire about the Ford Ranger Raptor is the fact that once it rolls out of the dealership, you can bring it to any off-road environment and it will most likely be ready to take it on — no questions asked. Other vehicles might need to swap out certain parts but the Raptor has been built to always be ready.

Of course, you don’t always have to push the Raptor to its limits just to enjoy the vehicle and that’s what adds appeal to it. With the Raptor, you have the choice to use it as a no holds barred performance truck or settle for a more conservative driving style. 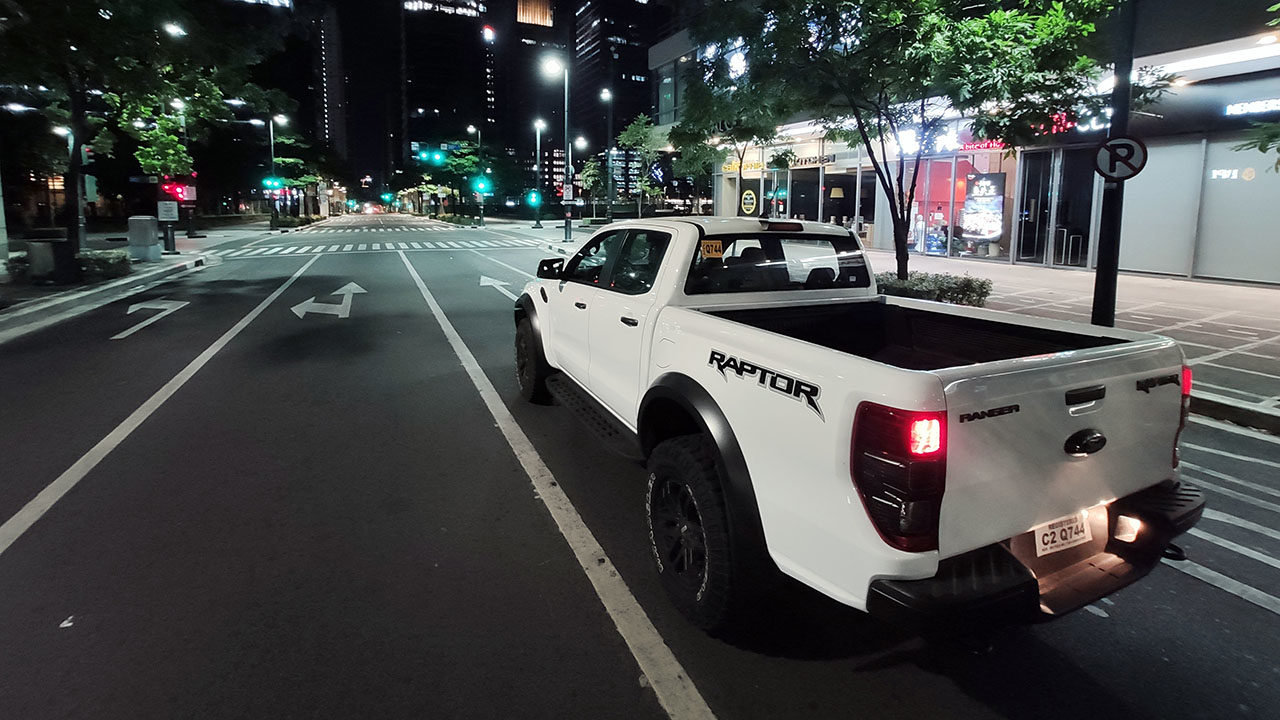 Mind you, going for the latter doesn’t mean you’re wasting the potential of this vehicle. With its size and power under the hood, you can still take advantage of its capabilities like hauling and transporting stuff — especially during these trying times that we’re all in.

So with that short drive, we were able to get acquainted with the softer side of the Raptor. No, we didn’t make it fly or went river crossing, but that doesn’t mean the truck wasn’t able to showcase what it offers and what it’s capable of.

This article first appeared on The Modern Creatures.